Suppose this time you have conflicts when you do a Pull, meaning your local branch had a conflicting change that was committed locally (but not yet pushed – see Outgoing Commits 1 in screenshot below) and someone else (let’s say you via GitHub.com UI) made a corresponding  conflicting change on the remote.

Here’s the UI setup in Team Explorer. Click on Pull. 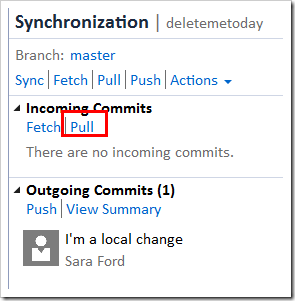 Git halts the pull operation (at the merge portion) when it detects the conflicting changes, as expected.

From here it should be familiar territory by now. Clicking conflicts brings you to a merge conflict screen.

Clicking Merge brings up the 3 way merge tool (or choose a take remote  or a keep local). If you go the Merge tool route, make sure you click “Accept Merge” at the top. Gets me every time.

Once you’ve accepted the merge (or choose to use the remote or local version), click Commit Merge.

Now we have to commit those our resulting merge. Click Commit Staged in Changes pane in Team Explorer.

and you’re done! Reviewing the local master history shows the merge commit now as the tip.

Still thinking re yesterday how a Pull is different than a Fetch + Merge. I guess if you know you want to download changes, but not ready to deal with any potential conflicts at this time (e.g. going offline for a while or got other things to do right now), Fetch is the way to go. If you know you’re ready to start playing with the code on your local branch, then Pull is the way to go, I think.

One of my favorite Nintendo NES games was Dragon Warrior. It made you finish the game. At level 30, you couldn’t gain any more experience points. The mentor wizard person (because there’s always a mentor wizard person) would tell you, “Aren’t you strong enough to defeat the DragonLord?”

As I debated whether I knew enough to write a tip about configuring your git diff and merge tools, I ask myself “Aren’t you strong enough to defeat the git diff merge config tool?!”

For today’s tip, I’m using the git-scm instructions and this translation for Windows

Let’s start by engaging in epic battle with the git-scm instructions. I’m going to assume you’ve installed p4merge. Yes I know there are others, but for now, I’m going to follow these instructions. The journey to 3rd degree black belt starts with a single punch.

These are the two lines I get stuck on:

so why need two lines? Perhaps I’m not recalling enough of my shell programming or the translation fails over to Windows? The instructions say

so `extMerge` is a variable. But why can’t you have it all on the same line?? What am I missing?

and also, what is “mergetool”? is it yet another variable? and how does it differ from merge.tool?

I’ll assume you have p4merge installed here in C:\Program Files\Perforce

Now let’s create a merge conflict, but this time, I’m going to keep my heart rate low when the (master|MERGING) appears! Btw I called my branch `conflicting` just because.

now you can type in git mergetool

I’m not going to go over p4merge, but I think the “error” showing for the base file is because p4merge is trying to do a 3-way merge, but only has 2 files. Don’t quote me on this.

After modifying the resulting myfile1.text and hitting save in p4merge and closing it, we’re back to the merge conflict state. This used to freak me out because git didn’t “move on”. But now I know what to do!

You can do a `git status` to verify where you are at.

Perfect! We’re done with myfile1.txt and it is staged. Since it is staged, we can simply commit it via `git commit -m “my merge message”`

And boom! I’ve now done epic battle with one of my most feared Git foes.

The most memorable aspect of the game was the ending… but not for the reasons you’d think. The game had their basic “hero” ending, but it also offered a twist. Before going into battle with the Dragonlord, he’d ask you to join him in being evil and taking over the universe. If you said yes, the game would “freeze” and IIRC, it would erase your saved game! I’ve never heard of another game doing this. There’s the “did you give a dog a sandwich?” story, but not a “come join the dark side” option destroying your saved game!

Following from yesterday’s tip, suppose you have a branch that you plan to merge, but before the merge is committed, you want to verify things. Perhaps you want to hit F5 or perform some other testing. In other words, you are telling git, “Do the merge, but allow me to hit the commit button.”

I guess this is an inverse of “sudo make me a sandwich” which would be “hey sudo, about that sandwich, if you take all the stuff out of the refrigerator, I’ll finish making it myself.”

Note: I’m using the –no-ff option because I don’t have an actual merge conflict in my branch, so I need to tell git not to do a fast-forward.

If you do a `git status` you’ll see that all conflicts fixed, but you’re still merging, just as the scary (master|MERGING) tells you.

Notice how the next line tells you to do a `git commit`and the Changes to be committed looks like a good old staging message.

From here, we just need to do a `git commit` (which would open your `git config core.editor` – mine is set to notepad. baby steps)

And doing a `git log` shows the initial readme being added, then the commit from the mybranch4, then the merge commit!

I feel that a lot of Git tutorials forget what that raw, primal panic feels like when you see your branch name change to (master|MERGING). For me personally, 80% of the panic comes from not knowing “how do I get out of this state?! How can we pretend this never happened??”

Today’s tip is about how to get into and out of a merge conflict state, without creating any actual conflicts! I say no conflicts because the easier the setup, the easier it will be to practice, and eventually you’ll build up enough muscle memory to stay calm in future situations.

I have a branch called mybranch3 that simply contains a new file (e.g. touch myfile.txt). If I did just a `git merge –no-commit mybranch3` git would apply a fast-forward, so you have to add the –no-ff. I guess the fast-forward check take precedence in the git world.

The –no-commit tells Git not to automatically do a merge commit, but rather, let you manually do the merge commit, as we’ll see in tomorrow’s tip.

You could do a `git status` to figure out how to finish the merge (e.g. `git commit -m “merging mybranch3″`), but today’s tip is about practicing, “I’m taking my ball and going home.” You show Git who’s boss!

and as you see from the `git log –oneline`, nothing was merged in from mybranch3. (the readme commit was my initial commit. I guess saying initial commit would have made more sense.)

P.S. this was my original vision for this series: take each option of each git command, play with it, try to break it, and blog about it. And it’s still my vision! But got to get through some of the more conceptual stuff first. I also want to get to the internal plumbing of trees, blobs, etc. Maybe in December 😉