From the previous blog post, we now have these ListView items, we need to edit them. Persisting this data will be for an upcoming blog post. I’m trying hard not to blog dissertations. 🙂

To follow along, go to my ListViewInTabbedControl and  `git checkout tags/editing-fabrics` or view the diff.

Add a Fabric property to the ItemDetailsViewModel

and it in the ItemDetailsViewModel constructor, assign the incoming Fabric object to the Fabric property.

And that’s it for the view model! Remember, you’re deriving from BaseViewModel, which derives from ObservableObject, which implements INotifyPropertyChange.

Add the textboxes to the View

In Page1.xaml, add the Label and Entry (Xamarin-speak for textbook)

Now you’ll have an edit page for your fabrics 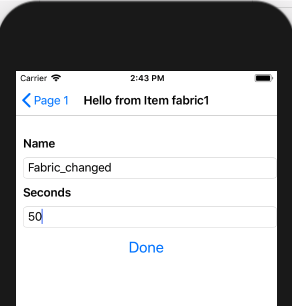 and now your fabrics are edited! 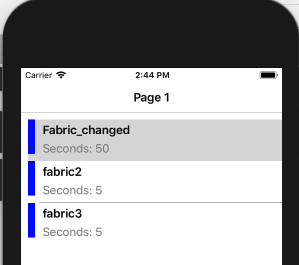 In the next post, I’ll talk about adding a new fabric to the list (including the messaging service). Stay tuned!

My adventures in “I can has MVVM” continues! Please see Part 1 (what this app is) and Part 2 (ListView).

If I’ve misunderstood something, please let me know! The only way to combat Impostor Syndrome is to fight it head on.

To follow along, go to my ListViewInTabbedControl and  `git checkout tags/ItemDetailsPage` or view creating the ItemDetailsPage here and view the adding the commanding diff here.

If you can eventually debug your issue, debugging is a great teacher! 🙂

Originally I was going to refer to a scene from 13 Assassins (2011). Wait, hear me out 🙂 I was thinking of that scene towards the end of the movie where the guy gets hit and experiences pain for the first time, and the other guy says something like “well, that was unexpected.” For some reason, debugging this issue made me think of that scene /shrugs 🙂

When I tried to open the ItemDetailsPage, I got

Say the classic words with me, “But how is this working on my other app?” I know this code below should work to show the I​temDetailsPage

So I tried to give it a NavigationPage…

and I got the same PushAsync is not supported globally on iOS, please use a NavigationPage exception. Grr.

What I mean is in App.xaml.cs, although I created navigation pages for these pages,

I neglected to add them to the tabbed control. Notice below I added page1 and page2 and not page1Nav and page2Nav, hence the exception.

Make sure to change these lines to

Okay now back to your originally scheduled blog post, already in progress…

We’ll use `ItemTapped=”Handle_ItemTapped”` here in the code behind, since there’s not a corresponding bindable property, as you see in SelectedItem.

But what does “not a bindable property” mean? You might be tempted to try “ItemTapped="{Binding ItemTapped}" but that won’t work. You’ll get

You’ll need to use a click event handler in the code behind for item tapped. Why not just use ItemSelected? Well, the issue is when the user wants to edit the same item twice in a row. For example, say the user edits Fabric 1. Upon returning, this item will still be selected. Although it’s in an “inactive selection” state, you can’t select it again, meaning the user will try to tap it, but nothing will happen. The app will still just look at you. Hence for this UX design requirement, you need to use ItemTapped. And IMO, “tapped” is more descriptive of the action the user is performing than “selecting”.

Add the following code to Page1.xaml

The ListView now gets its content from the ObservableCollection of Fabrics. I called this OCFabrics to break my reliance on it for all the app’s needs.

And in the codebehind for Page1.xaml.cs, add the following:

I’ll go over the significance of PushAsync vs PushModalAsync at the bottom of this post.

Add a new View called `ItemDetailsPage` under Views. (This is a Forms – ContentPage Xaml in VS for Mac). And a code behind called ItemDetailsViewModel.

Use the following code for the ItemDetailsPage

and for the codebehind

Run this and now you’ll get

3) Now we need a way to escape by adding a Done button and a DoneEditing command.

In the ItemsDetailsViewModel, add a new property for the command

in the ItemsDetailsViewModel constructor, create the new command, as shown below

where the `DoneEditing` is the delegate. Add the DoneEditing method in the ItemsDetailsViewModel class, e.g.

in the ItemDetailsPage, add a button to your StackLayout

and voila! You can now hit done and skip around! The item tapped will be shown in the Details Page, e.g. Fabric3 will say “Hello from Fabric 3” with a Done button at the bottom.

Not sure? Let’s experiment!

and have DoneEditing() to a corresponding

both the `< Page 1` back button and the Done slide back.

BTW, that back button comes from using NavigationPages as the children of the Tabbed control, as mentioned at the top of my post

But let’s try out the PushModalAsync() to be certain which UX experience we want. Change both Handle_ItemTapped() and DoneEditing() to use Modal. Remember: if you push Modal you need to Pop Modal.

Notice how the Page appears from the bottom, but also no title or back button.

next blog post will talk about editing the items.

Start here: Part 1 – Sara can has MVVM for what I’m building in this series.

Note: Matt Soucoup has been awesome helping me break my mental barrier to using services in a MVVM design pattern. Go check out his Xamarin blog. Consider my blog posts my homework assignments. The only way I truly grok a concept is when I can explain it to someone else.

To follow along, go to my ListViewInTabbedControl and  `git checkout tags/listview-created` or view the diff here.

1) Add a Fabric Model that derives from ObservableObject

ObservableObject is needed so that when the user edits items, the ListView will get those updates. For example,

2) In PageOneViewModel create an observable collection

Note to self: This ObservableCollection is *only* for the View to display items in the ListView. It’s “transient” to the ListView. Do *NOT* use this as the “source of truth” for fabrics, i.e. do not use as the official list of fabrics the rest of the app should use, e.g. which fabric are we on? what’s the seconds remaining for the current fabrics? This has been my biggest mental hurdle in MVVM.

If this isn’t the source of truth, what is? Enter a FabricDataService! More on this in my upcoming blog posts.

Let’s initialize this ObservableCollection with some data. we’ll change where this data comes from in a couple of blog posts using a FabricDataService. We just want a working list view for now.

3) In PageOneViewModel create a ListView.

And give it a run!

Yay! I can has ListView with data binding!

Let’s call it here for Part 2… Onward to Part 3 – Displaying Items in a ItemDetailsPage (coming soon!)

I’m big into dev journaling. I don’t know why. I have OneNotes filled of “What did I learn today”, which are probably mostly wrong from random searches. I want to break out of this “Expert Beginner” mode. And the best way I can think of that right now is through transparency.

I have a couple of physical therapy iOS apps in the app store that I’m rewriting in Xamarin.Forms. I finished these over the summer, but I didn’t like the spaghetti code mess I inflicted upon myself. I’m taking this holiday break to re-re-design my app to fit a MVVM pattern. Part of me says “it’s better to have a working app in the app store than no app” and another part of me says “what will it take for me to grok non-spaghetti code concepts??” Those two parts have finally collided.

I’ve spoken with several people over the past 6 months to help me get over this MVVM conceptual hurdle, which you’ll read about in Part 2. To be clear, I get commanding and databinding. What I’ve always struggled with is how to get that data consumed by other parts of the app (e.g. a service, but how does a service work? Is it a static class? Is it a singleton? etc.)

Huge shout out and thank you to Matt Soucoup for being my human StackOverflow! Matt and I have been recording code review sessions together where I get to ask all of my n00b questions “Why are you using a NavigationPage and not just a regular ContentPage?”,  “Oh is that what that xmlns stands for!” and “I didn’t realize databinding took care of that automatically!” If you’re doing Xamarin work, stop reading my blog and go check out his at https://codemilltech.com/

This Fabric ListView is found under the Settings tab.

After the user populates the Settings, the user taps on the Timer page. When the user hits play, the timer starts for that fabric. In the screenshot below, Fabric 1 has 7 seconds remaining.

And the end, an alarm plays along with a couple of message boxes for user prompts (trust me the UX will make sense when we get there).

After the user dismisses the 2 message boxes, the timer goes onto the next fabric. When the timer has gone through all fabrics in the list, the sessions is saved (this is new in this Xamarin.Forms rewrite).

Each section below contains a “What I learned” retrospective.

To follow along for this blog post, check out all the tags (no pun intended) using git tag at   https://github.com/saraford/ListViewInsideTabbedControl

To see the completed code for this step:

Let’s start with the App()  constructor.

This code will produce the following app:

What did I learn?

2 – Wiring up the ViewModel for our Xamarin.Forms pages

To see the completed code for this step:

I remember someone telling me years ago that you always want to use a MVVM framework. This section explains why using a MVVM framework helps prevent you from rewriting code. BTW I’m the *worst* when it comes to this…I rewrite things, crazy things, all the time because I never stop first to check if there’s something I could reuse.

Step 1 – install Refactored.MvvmHelpers by James Montemagno. Install this in your PCL.

This MvvmHelpers library gets you a couple of useful things

Step 2 – Next let’s refactor our solution

Step 3 – Have the PageOneViewModel look like the code below

Yes, I’m putting the View’s Navigation property into the view model… not exactly a pure separation of concerns. But this actually works out quite nicely! And it’s my next blog post (Part 2) that I’m desperately trying to grok, i.e. how the TimerPage gets the databinding’ed (databound? databinded?) data.

Also note the Title property being set. This comes from BaseViewModel.

Aside: my first CS prof told us never use the same variable name as in the parameter of a method or constructor as the class fields / properties. But this in the days of Turbo Pascal and I don’t recall if we had a `this` keyword back then.

Step 4 – Let’s have the Views create their ViewModels

The ViewModels will need to pass in the Navigation and setup the ViewModel as the binding context. So in the Views code behind…

Step 5 – Use databinding for the Title

Now to test we’re actually getting content from the ViewModel binding, update the Page1.xaml as follows

And you’ll get the following. Notice the new text. 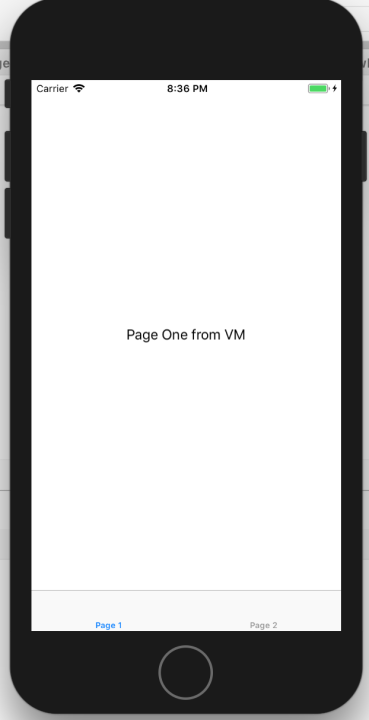 Rinse and repeat for Page2.

The reason why I like doing things twice by having two pages (and yeah it’s a moot point since a tabbed control needs 2 or more) is that I can verify my blog posts by following my own directions for Page2.

What did I learn

The more you know!

In App.xaml.cs, add the assembly attribute before the namespace.

Next blog post is about how to wire up a ListView instead the TabbedControl. Not sure why I called my project ListViewInsideTabbedDocument – that’s some old muscle memory from Visual Studio taking over my typing!