My learning preference is through hands-on experimentation. I like taking things apart, putting them back together, or trying to break stuff. So let’s break apart this HEAD thingy.

According to this SO answer, it is a file.

and that file contains some content. I’d assume “ref” means reference, and “master” is the master branch we’ve been playing with. I’m not sure what “refs/heads/master” actually stands for, but I’ll figure that out later.

I keep hearing HEAD referred to as a pointer. This would make sense if it is a file that only contains the location(?) where to point to. That answers the literal question.

But what does the HEAD pointer do?

According to this stack overflow answer, “HEAD is a reference to the last commit in the currently checked-out branch.” Considering we have master checked out, that makes sense. Doing a git log would show all the commits in the repo.  If we switched to a branch and did a git log, we’d see all the commits for that branch.

But what about the detached HEAD state from yesterday?

Continuing with the same stack overflow answer, “A detached HEAD is the situation you end up in whenever you check out a commit (or tag) instead of a branch.” 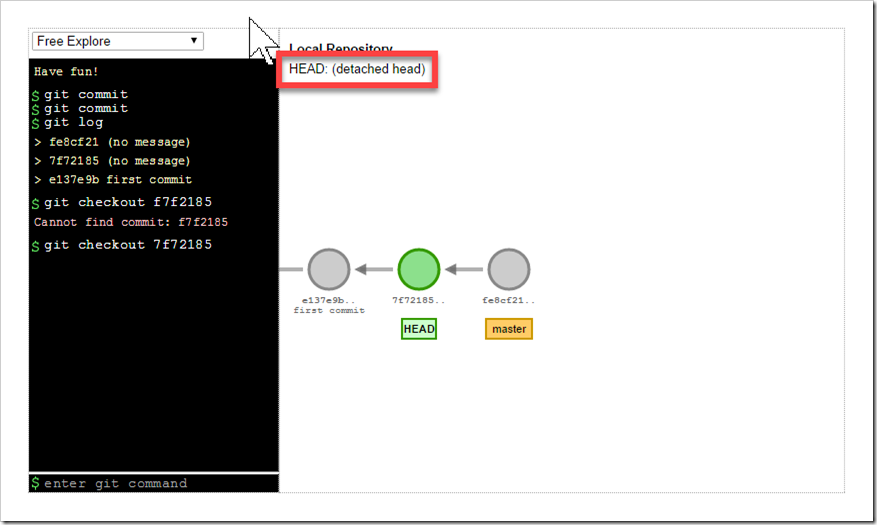 Now I had to re-read this line from the same stack overflow answer, “In this case, you have to imagine this as a temporary branch without a name; so instead of having a named branch reference, we only have HEAD.”

A temporary branch without a name??

Okay, what I think is happening is that if you were in a detached state (as shown above) and did a git log, you’d only see 2 commits, not 3.  Since you are seeing 2 commits, you are still technically on a branch. It’s just that this branch doesn’t have a name.

In other words, a Git pointer never points to just a single commit. A git pointer points to the last commit in that series of commits (which I guess is where the temporary nameless branch concept comes from). Which now begs the question… what’s really a git branch?